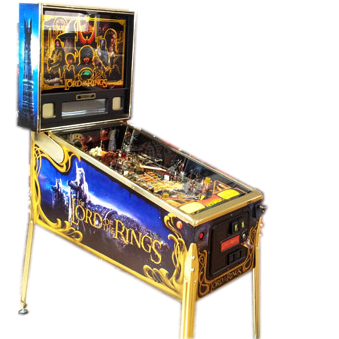 Lord Of the Rings Limited Edition by Stern

The greatest adventure of all time is now STERN Pinball’s epic pinball machine for all ages. THE LORD OF THE RINGS™ pinball machine features exciting elements from New Line Cinema’s box office hits, THE FELLOWSHIP OF THE RING™ and THE TWO TOWERS, as well as the most anticipated installment yet, THE RETURN OF THE KING™, which opens worldwide on December 17th.

A Balrog toy that pivots when hit by the ball, revealing the jump ramp that leads to The One Ring™;

The pinball features original speech from Elijah Wood (Frodo), as well as John Rhys-Davies (Gimli the Dwarf). Backglass and cabinet artwork for THE LORD OF THE RINGS™ was created by artist Jerry Vanderstelt, while playfield art was designed by Kevin O’Connor. Sounds and special effects were produced by Chris Granner. Rules are by Keith Johnson on his first outing since The Simpsons/Pinball Party™.

“Players of all levels will love THE LORD OF THE RINGS™,” Gary STERN said. “And for those truly familiar with the movies and books, the pinball machine follows the story perfectly. All those involved in the design of the pinball machine are true fans of THE LORD OF THE RINGS™, with intimate knowledge of it. That is why this game is so great – the designers were into this title.”

THE LORD OF THE RINGS™ movie trilogy is produced and directed by Peter Jackson.