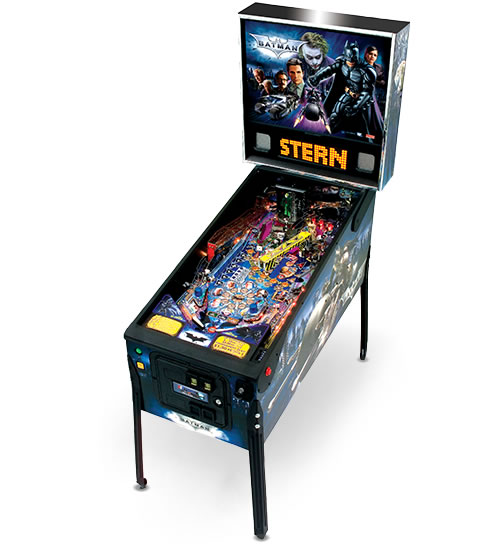 The THE DARK KNIGHT™ arrives in Stern Pinball’s new BATMAN™ pinball machine. Available through a partnership with Warner Bros. Consumer Products, on behalf of DC Comics, BATMAN™ is based on the action-adventure movie, THE DARK KNIGHT™, to be released in theatres July 18th.  Stern’s own Lyman Sheats designed the rules for BATMAN™ pinball, and the game designer for THE LORD OF THE RINGS™ created the playfield layout.

BATMAN™  is a perfect pinball machine for fans of DC Comics’ BATMAN™ comic books, as well as the DARK KNIGHT™ and BATMAN BEGINS movies.  BATMAN™ pinball is also a great piece for homeowners, resellers and game operators.

BATMAN™ pinball offers many exciting features, including: The Joker’s Reveal Mechanism, a mechanical cylinder that rotates to reveal and fight a taunting Joker; Scarecrow’s Crane, a mechanical crane featuring a spring-attach pinball which the player can strike with the pinball; the BATMOBILE™Bridge, a teeter totter mechanism that races a pinball against a Hot Wheels® BATMOBILE™; an upper mini-playfield; and lots of multi-ball action.