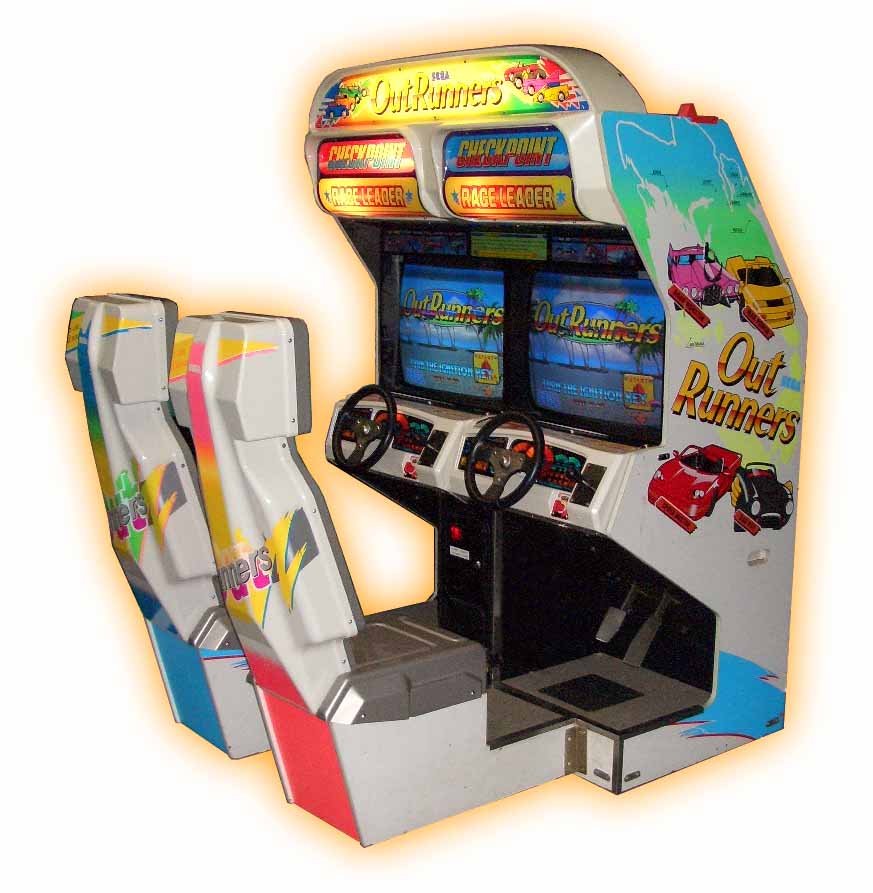 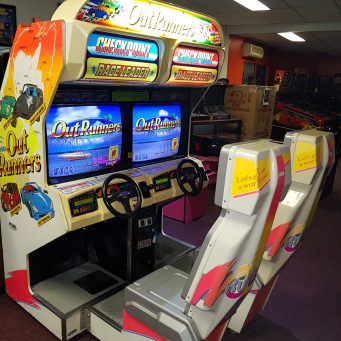 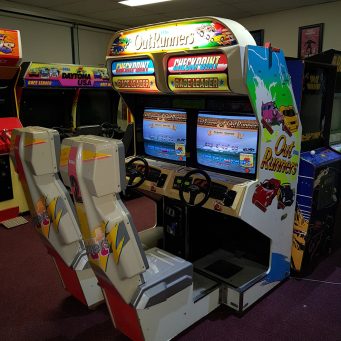 OutRunners is the fourth game in the Out Run series, following Battle Out Run and Turbo Outrun. After Turbo Outrun’s departure from Out Run’s laid-back, charming atmosphere, fans wanted a game that captured the spirit of the original. OutRunners succeeded in doing this; it brought back the ability to take different paths through forks in the road, returned to a lighthearted atmosphere, and distanced itself well from the “serious” Turbo Outrun. The game featured head-to-head support, and with enough cabinets, up to eight players could challenge each other. It was also the only game in the Out Run series to feature various selectable cars and multiple endings until OutRun 2. OutRunners was the most successful game released for Sega’s System Multi 32 hardware, and one of the last successful 2D games released by Sega. OutRunners was also known for having some of the best looking graphics seen at the time, thanks to creative sprite design and a very skillful use of parallax scrolling, similar to that found in Power Drift, released four years earlier. The game holds up very well today, and plays very similarly to a modern polygon based 3D racer, something not common in a racing game that utilises 2D graphics.[citation needed]

Some routes are accessible on more than one route combination like in the original Out Run. After the initial starting stage, the player has the option of either turning east or west. West leads through San Francisco, through the Easter Islands, into Asia and either into Africa or Europe. East goes through the Grand Canyon, South America or Niagara Falls, across the Atlantic Ocean, into Europe and either into Asia or Australia.

An anthropomorphic broad bean character is featured on billboards and the start of the game called “Broad Bean,” a parody of Bibendum (the Michelin man), presumably the mascot of the fictional company sponsoring the race, Sam Spree. In the Mega Drive version, both Sonic and Tails may fly by in a pair of Tornados and sprinkle the Sega logo onto the screen. Sonic can also be seen on various billboards in the first stage.[3]

All of the selectable cars in OutRunners are fictional convertibles, but bear resemblance to real automobiles. Notably, the Speed Buster closely resembles the Ferrari Testarossa featured in the original OutRun. Each car has its own set of a driver and passenger character, and have their own unique ending vignette if the player makes it to a goal. Each character set also has their own way of acting when their car crashes (Flying through the air, bouncing like balls, running after the car, etc.), but unlike their OutRun counterparts, they always land right back in the car and keep going without stopping.