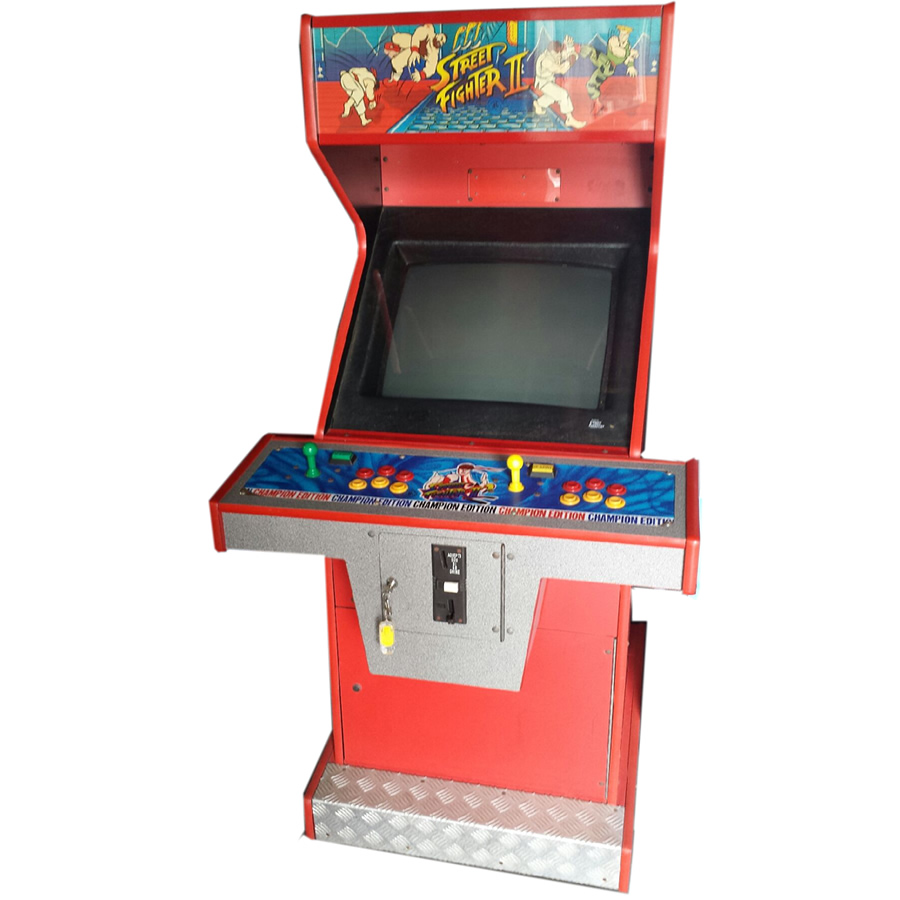 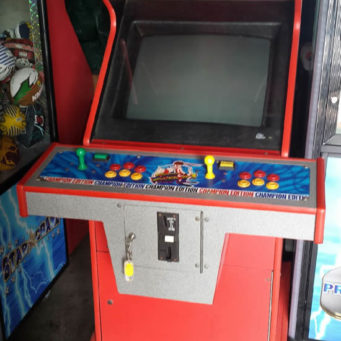 The most popular game of the 90’s in arcades across the world was without doubt Street Fighter 2.

Mostly released as a motherboard only, there are very few original Street Fighter 2 machines to be found today.

Street Fighter 2 follows several of the conventions and rules already established by its original 1987 predecessor. The player engages opponents in one-on-one close quarter combat in a series of best-two-out-of-three matches. The objective of each round is to deplete the opponent’s vitality before the timer runs out. If both opponents knock each other out at the same time or the timer runs out with both fighters having an equal amount of vitality left, then a “double KO” or “draw game” is declared and additional rounds will be played until sudden death. In the first Street Fighter 2, a match could last up to ten rounds if there was no clear winner; this was reduced to four rounds in Champion Edition and onward. If there is no clear winner by the end of the final round, then either the computer-controlled opponent will win by default in a single-player match or both fighters will lose in a 2-player match.

After every third match in the single player mode, the player will participate in a “Bonus stage minigame” for additional points. The bonus games includes (in order) a car-breaking event similar to another bonus round featured in Final Fight; a barrel breaking bonus game where the barrels are dropped off from a conveyor belt above the player; and a drum-breaking bonus game where drums are flammable and piled over each other. The bonus games were removed from the arcade version of Super Street Fighter 2 Turbo (although they are featured in the Game Boy Advance version).

Like in the original, the game’s controls uses a configuration of an eight-directional joystick and six attack buttons. The player uses the joystick to jump, crouch and move the character towards or away from the opponent, as well as to guard the character from an opponent’s attacks. There are three punch buttons and three kick buttons of differing strength and speed (Light, Medium and Heavy). The player can perform a variety of basic moves in any position, including grabbing/throwing attacks, which were not featured in the original Street Fighter. Like in the original, the player can perform special moves by inputting a combination of directional and button-based commands.

Street Fighter II differs from its predecessor due to the selection of multiple playable characters, each with distinct fighting styles and special moves. A bug in the game’s code enabled the player to “cancel” during the animation of some moves by performing another move, allowing for a combination of several basic and special moves. This “combo” system was later adopted as a standard feature of fighting games, and was expanded upon in subsequent Street Fighter installments.

The original Street Fighter 2 features a roster of eight playable characters that could be selected by the player. The roster initially included Ryu and Ken—the two main characters from the original Street Fighter game—plus six new characters from different nationalities. In the single-player tournament, the player faces off against the other seven main characters, before proceeding to the final opponents, which are four non-selectable CPU-controlled boss opponents, known as the “Four Grand Masters”.

Balrog was designed as a pastiche of real-life boxer Mike Tyson and was originally named M. Bison (short for “Mike Bison”) in the Japanese versions, while Vega and M. Bison were originally named Balrog and Vega respectively. When the game was localized for the overseas market, the names of the bosses were rotated because the name and resemblance could have led to a likeness infringement lawsuit.