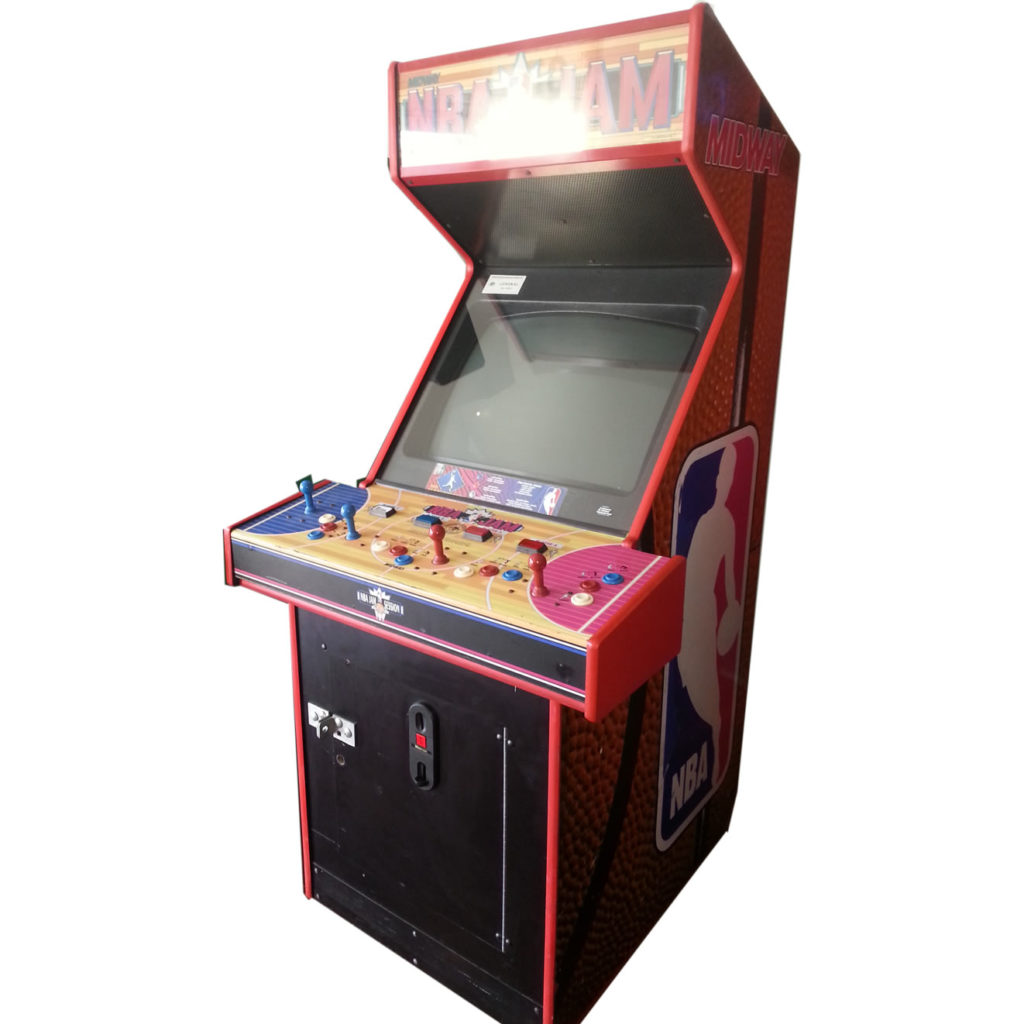 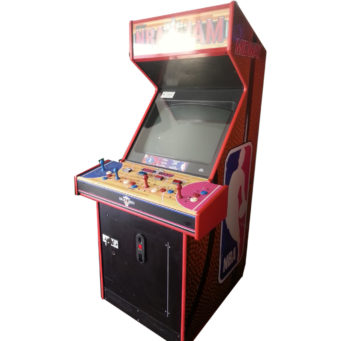 NBA Jam – full restoration. Nearly finished and ready for sale. One of the highest earning games of 1993. Still a great game and sort after today.
Ready for home or commercial use.

The game employed an exaggerated, over-the-top style, demonstrated by the player dunking from superhuman heights.

A key feature of NBA Jam is the exaggerated nature of the play – players jump many times above their own height, making slam dunks that defy both human capabilities and the laws of physics. There are no fouls, free throws, or violations except goaltending and 24-second violations. This meant the player is able to freely shove or elbow his opponent out of the way. Additionally, the game has an “on fire” feature, where if one player makes three baskets in a row, he becomes “on fire” and has unlimited turbo and has increased shooting precision. The “on fire” mode continues until the other team scores, or until the player who is on fire scores 4 additional consecutive baskets while “on fire.”

The game is filled with easter eggs, special features and players activated by initials or button/joystick combinations. For example, pressing A five times and right five times on any Sega Genesis controller would activate “Super Clean Floors”. This feature would cause characters to fall if they ran too fast or changed direction too quickly. And players can enter special codes to unlock hidden players, ranging from US President Bill Clinton to Hugo the Charlotte Hornets mascot. Early versions of the sequel, NBA Jam Tournament Edition, allows players to put in codes that allow people to play as characters from Mortal Kombat, but the NBA, uneasy over the controversies surrounding Mortal Kombat‘s levels of violence, forced Midway to remove these characters in later updates. On the arcade machine, there is also a hidden ‘tank’ game that allows you to run around a 3D wireframe field. In order to access this mode however, you were required to be able to toggle the on/off switch located behind the machine. While the game was powering back on, you would hold Up + all buttons on player 1 and Down + all buttons on player 2.

The original arcade version of NBA Jam features team rosters from the 1992-93 NBA season and the console versions use rosters from the 1993-94 NBA season. More up-to-date rosters were available in subsequent ports released for the Sega CD, Game Boy, and Game Gear in 1994. Midway did not secure the license to use Michael Jordan‘s name or likeness (as Jordan himself owns the rights to his name and likeness, and not the NBA), and as such he was not available as a player for the Chicago Bulls or any other team. Another notable absence from the home versions is Shaquille O’Neal, who was in the arcade version as a member of the Orlando Magic. New Jersey Nets guard Dražen Petrović and Boston Celtics forward Reggie Lewis, both of whom died after the release of the arcade version, were also removed from the home versions.

A limited edition version of the game with an additional team composed of Gary Payton and Michael Jordan was developed primarily for Jordan and Payton’s personal use.

Note: Some home console versions of NBA Jam were coded later than others, and as a result of real-life roster changes or in the cases of Charles Barkley and Shaquille O’Neal, legal reasons, some rosters differ from version to version.

The game was devised after Midway’s previous arcade release Total Carnage failed to meet sales expectations. Lead designer and programmer Turmell wanted to develop a game with a wider appeal and decided to mix the digitized graphics of some of Midway’s previous titles to create a title similar to Midway’s previous basketball game Arch Rivals. Midway was able to procure a license from the NBA, paying royalties of $100 for each unit sold.[1] In Midway’s original pitch video to the NBA, they stated that they planned on including various additional features. These included different camera angles, tips from coaches, instant replays and a first-person view on fast breaks. None of these features were included in the final game. The graphics for the NBA players were created from digitized video footage of several amateur basketball players, including future NBA player Stephen Howard. These players were available as secret characters in certain versions of the game.[4]

In 2008, Turmell confirmed a long held suspicion that the game had a bias against the Chicago Bulls. According to Turmell, a Detroit Pistons fan, the game was programmed such that the Bulls would miss last-second shots in close games against the Pistons.[2]

An update named NBA Jam Tournament Edition (commonly referred to as NBA Jam T.E.) featured updated rosters, new features and easter eggs combined with the same gameplay of the original. Jon Hey created new music specifically for NBA Jam T.E. to replace the original NBA Jam music. Teams now consisted of three players (with the exception of the new “Rookies” team, which consists of five players, all picked in the 1994 NBA Draft) and players could be substituted into the game at half time. The game also featured new hidden teams and hidden playable characters. Early versions of the game included characters from Midway’s Mortal Kombat games. Players were also assigned more attributes, including clutch and fatigue levels. In addition, the game also introduced features such as a “Tournament” mode that turned off computer assistance and on-court hot spots that allowed for additional points or special slam dunks.